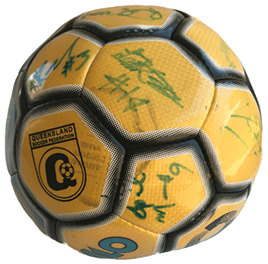 At the turn of the decade, football was embraced by a much broader demographic around the world. Powerful amounts of investment flooded the US competition; Cable TV was hungry for content; player transfer fees in the men’s game exploded across Europe; and the middle-classes everywhere began to support a team. Here in Australia, Soccer Federations rushed, sometimes too quickly, to capitalise and expand growth and interest. It didn’t quite work out, but we did see football and its culture take some interesting new directions.

Organisations like the AWSA seized opportunities through marketing and sponsorship to attract funding. The Queensland Academy of Sport fielded Queensland Sting in a national level top tier league competition called the Women’s National Soccer League. And fans started to exercise their muscle too, cheaper means of print and production saw the rise of Football Fanzines like The Far Post.

WSQ formed in 1991, bringing together football organisation from across the State. The offices were based in the same place as the SQWSA. In the first half of the decade Queensland teams met with success. The local game has picked up steam but the game across the city was being run at cross purposes. It echoed the state of play at the national level.

A collision of crises loomed over the game.

Australian Tour of Malaysia 1999
For reasons, we would like to find out more about, it would appear that the 1999 AWSA National Championships took place in Malaysia. The wooden box pictured here (24 inches high and 16 inches wide) certainly looks like an esky, but we suspect it was made to carry the trophy.
Can you help?
If you can help with anything you've seen across these pages, we'd really appreciate it if you get in touch.

Copyright © 2019 - with the ball at HER feet - Copyright statement